I am in the process of rebooting my GTD workflow. Since I do most of my work in Emacs, I decided it was also time to refactor and improve my Emacs configuration. What was wrong with my configuration?

I’ve documented my work on my Emacs configuration here, mostly as a means of reminding my future self what I did. Overall the experience was pleasant. Emacs 24 brings many long-needed features to Emacs.

The end result can be seen below. 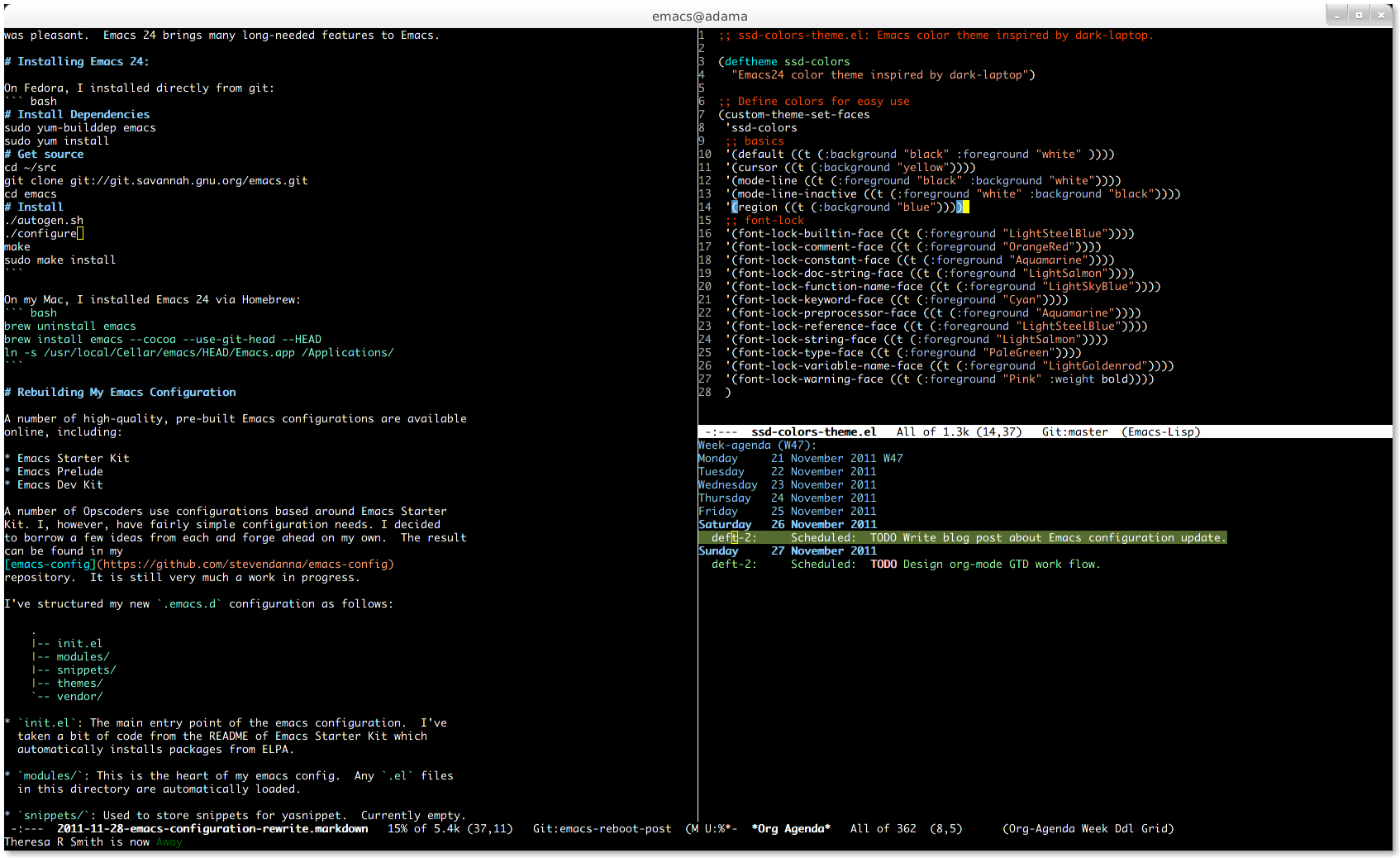 On Fedora, I installed directly from git:

On my Mac, I installed Emacs 24 via Homebrew:

A number of high-quality, pre-built Emacs configurations are available online, including:

A few Opscoders use configurations based around Emacs Starter Kit. However, since I have fairly simple configuration needs, I decided to borrow a few ideas from each and forge ahead on my own. The result can be found in my emacs-config repository. It is still very much a work in progress.

The auto-installation of packages is great for sharing my configuration between workstations; but, it can be brutally slow the first time you run it.

The majority of my emacs configuration consists of minor customizations to popular, pre-built packages. The following are the packages that I use on a daily basis:

In addition to the tried-and-true packages above and a handful of popular programming modes, I added the following packages to my standard configuration:

All of these packages are either shipped with Emacs or available as packages using the new package management features in Emacs 24. I was initially skeptical of the package management features. However, I’ve found that a large amount of the complexity in managing my previous configuration was the result of manually managing packages. With this complexity removed, moving to Emacs 24 was relatively painless.

I was also pleased to see improvements to clipboard integration. My old .emacs file had a number of ugly workarounds for properly interacting with the clipboard on multiple platforms. I’ve found this completely unnecessary in Emacs 24.

The only problem I encountered during this transition was finding a suitable color theme. Low-contrast color themes such as zenburn seem to be in vogue at the moment. I prefer higher-contrast themes. In Emacs 23, I used dark-laptop, but it appears that this theme has not yet been ported to Emacs 24’s built-in color theme support. My current theme is a small color theme based heavily on dark-laptop.

I’ve deployed my new configuration to all of my workstations via a simple git pull. My hope is that a few weeks of real-world use will find the rough edges that remain. Comments and suggestions welcome!